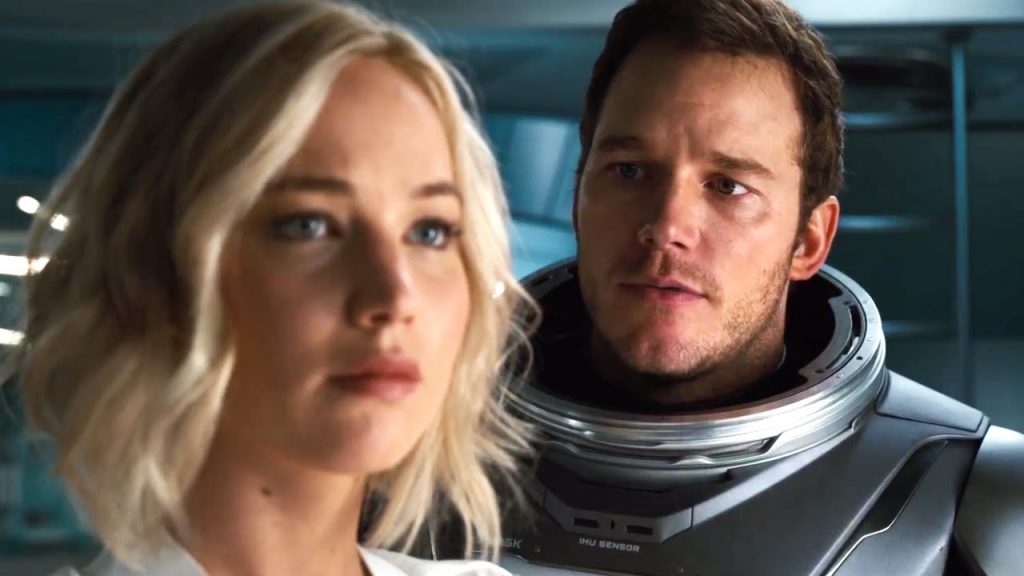 There’s one really important thing you need to know about Passengers: It’s not the movie the trailers and marketing would have you believe. If you were expecting some kind of Titanic-style love story of two (unfeasibly) attractive spirits thrown together in the face of adversity then, boy-howdy, are you ever out of luck.

What the trailers and tv spots would have you believe is that Passengers is all about two travellers into deep space woken from their hyper-sleep 30-years into their 120-year scheduled journey to a new home world; love blossoms between the two who have the run of their pristine, super-swanky spaceship; catastrophe comes-a-calling and the two must save not only their own lives but those of their five thousand fellow (sleeping) passengers. It all looked like a rather sweet (if a little thin) romantic spectacular with plenty of special effects, explosions, excitement and two of Hollywood’s most likeable (and, let’s face it, bankable) stars, didn’t it? So why do I feel so underwhelmed and angry by the movie I actually watched?

What those trailers don’t tell you is that Jim (Chris Pratt) is awoken by a malfunction of his sleeping pod a year before the emergence of Aurora (Jennifer Lawrence), or that she isn’t the victim of another malfunction but of Jim’s sabotage. The first act finds Jim alone, wandering the pristine, mall-like decks and facilities of the Avalon (the ship, we are informed, was designed to wake its cargo four months from its destination hence the opulence), his only friend is bartender android Arthur (Michael Sheen) who listens to Jim’s woes and doles out only pre-programmed, clichéd advice. Jim soon sinks into depression as the knowledge that he will likely die alone long before another soul wakes begins to dawn on him. He begins to obsess over Aurora, laying there like his own personal Sleeping Beauty (hence her name, I guess), watching her pre-recorded video interview and reading her journal. So, he hatches a plan to revive her and tell her that both their pods must have malfunctioned at the same time.

The second act is the romantic bit as Jim woos the object of his affection and manipulates her to fall in love with him, all the while hiding his secret like a contestant on The Apprentice hides the truth about his CV. The truth eventually outs just in time for the all-action, explodey stuff of the final act as the two must come together to save the ship and its slumbering inhabitants.

There is very little that works in Passengers: Tonally the movie is all over the place, it just has no idea what it wants to be or where it is supposed to be going; as likeable as the two leads are individually, they have little to no chemistry between them; Jennifer Lawrence’s role in particular is hugely under written that one of the most talented actresses of her generation struggles to make Aurora believable (but, then again, she’s not a character, she’s a plot device or worse, a sex fantasy); it’s full of super-massive plot-holes that you could fly the Starship Enterprise through and still have enough room for a couple of Millennium Falcons.

Director Morten Tyldum (who it should never be forgotten managed to crowbar a heterosexual subplot into the story of Alan Turing in his last movie, The Imitation Game) and writer Jon Spaihts bungle the “promised” love story completely. What they have delivered is one of the most toxic pieces of misogyny outside of the dark side of the internet. If Denis Villeneuve’s Arrival was the shining ray of hope for the world in 2016, Passengers is the alt-right fantasy we should be railing against.

Passengers flubs the big questions it asks and worse, it doesn’t even acknowledge that it’s asking them. 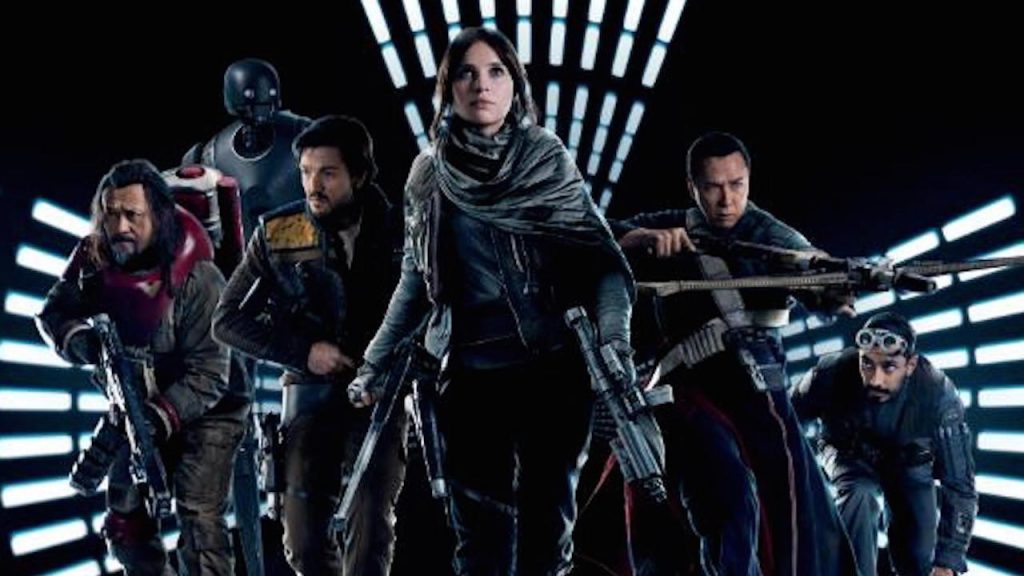 There’s a well-known, much-beloved high street clothes and food retailer whose sumptuous advertisements for puddings makes one salivate at the mere thought of them and, in general, they are quite delicious though sometimes a little less so than they would have you believe. Rogue One: A Star Wars Story is such a confection, it’s not quite what you were expecting. There are those that are wholly committed to the brand who will absolutely love it and defend it to their dying breath and there are those that may choose to try it the once and, although mildly pleased by the product, opt to mark it up as a decent enough effort but are not entirely sure what all the fuss is about.

Rogue One is so calorie packed with Easter eggs and nods to previous movies (or chapters to come or however this works) that Star Wars fans may well leave the cinema with the top button of their trousers undone, appetites well and truly sated. The rest of us may find we need to cinch our belts one hole further.

When her mother is murdered by the Empire and her father, Galen Erso (Mads Mikkelson), taken to finish construction of the first Death Star, young Jyn Erso (Beau Gadsden) escapes the clutches of evil Director Orson Krennic (Ben Mendelsohn) and delivers herself into the guardianship of more-than-slightly fanatical Rebel Alliance fighter Saw Gerrera (Forest Whitaker).  Years and untold adventures later, Jyn (now played by Felicity Jones) is rescued from a prison planet by Cassian Andor (Diego Luna), his robot side-kick K2-SO (voiced by Alan Tudyk) and his troop of rebels in the hope that she will lead them to her estranged father. 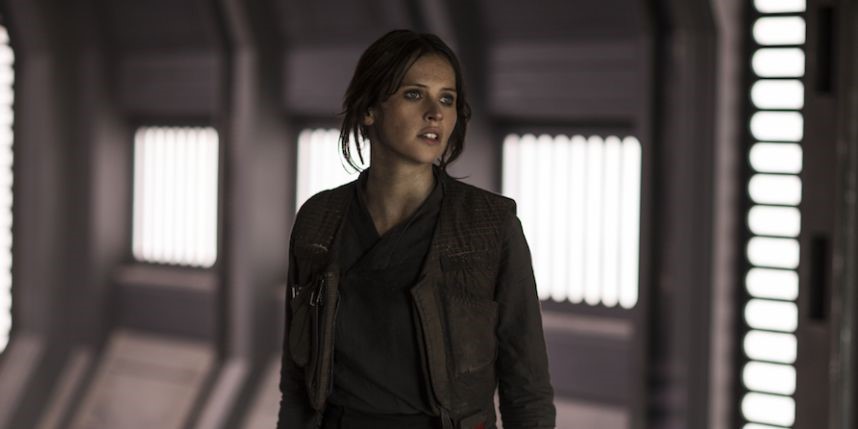 Meanwhile, Imperial defector Bodhi Rook (Riz Ahmed) seeks (the now even loopier) Gerrera with a message from Galen and news of the Empire’s new super-weapon. All sides converge on the desert planet Jedha where they enlist the cooperation of blind monk(?) Chirrut Imwe (Donnie Yen) and his protector Baze Malbus (Wen Jiang) and witness at first hand the destructive power of the Death Star.

Rogue One then shifts from all this set-up to full-on “Men (and woman and robot) On A Mission” movie as the companions track down Galen, argue a bit and finally attempt to recover the blueprints of the Death Star and get them to the Rebellion.

So, what we have here is episode 3½, kind of. Assuming you’ve seen episode 4, Star Wars: A New Hope, (or at least, the opening crawl) you’ll already know whether, or not, the mission is a success and therefore the narrative drive of Rogue One rests wholly on which, if any, of the team will survive?

And therein lays Rogue One’s greatest strength and (one of) its greatest weakness(es). Being part of the larger Star Wars narrative it gives greater depth and resonance to the following part: there is greater weight placed on the climactic Death Star battle of A New Hope; Luke Skywalker’s final torpedo becomes laced not only with saving the rebels but with the sacrifices laid down before he even steps into his X-Wing fighter; we now understand why such a terrifying and devastating weapon was fitted with a single and ridiculous flaw.

Unless you’ve just emerged, Kaspar Hauser-like, from a gothic basement bereft of all forms of story-telling you will understand how these men-on-a-mission movies work: a disparate bunch of characters are brought together, often for the greater good, to battle indomitable odds and wave-upon-wave of bad guys and many, if not all, of the team will die for the good of the mission. We’ve seen it countless times in movies such as The Dirty Dozen, The Magnificent Seven and The Guns of Navarone, and the success, or failure, of the story-telling lays in how much we care about the characters and how much of our emotions we invest in them. It’s all about the ensemble and how well they’re written. Unfortunately, there’s a lot of sub-par character writing going on in Rogue One, many of the team feel under-written and more like tropes than real people and this detracts from any emotional gut-punch you may feel when any of them meet their heroic ends.

Rogue One’s problems don’t stop there, however. There is one character in particular that presents a hugely worrying and moral question that, I suspect, will rumble on in the many think-pieces that will be written about the movie: Grand Moff Tarkin. Originally played by the late, great Peter Cushing, Grand Moff Tarkin is replaced here not by another actor but by a CGI avatar. Beyond the quality of the effect (which is uncanny but rather waxen), I was pulled from the movie by its absolute brazenness and my mind began to wander from the film’s narrative to questions of the ethics of the resurrection of long deceased and how studios may employ this effect in future. Another character in CGI’d in to a much lesser extent (appearing in just one scene), though its inclusion seems arbitrary and an unnecessary reveal, I’ll let you decide on that one (you’ll know who I’m talking about as soon as you see it).

That said the rest of the movie’s special effects are absolutely on point and the climactic space battle is exciting and wrought with spectacle. There’s also a welcome return of practical alien effects rather than an over-reliance on CGI, which is to be applauded.

Director Gareth Edwards keeps the action moving along at a brisk pace even though he tends to drop the ball when it comes to emotional beats. The acting, on the most part, is good but not great (a few lines soar, though many are flat as if being read for the first time without emotion or understanding and one made me want to strangle myself – a Darth Vader “Zinger” that even a Roger Moore era Bond would shudder at). Michael Giacchino’s score hits a lot of the familiar John Williams beats and then becomes its own thing always adding to the film and never detracting.

Overall, Rogue One is the Rocky III of the franchise: it is so invested in entertaining its audience that, for the most part, its problems can be ignored. And it is entertaining, it’s the best movie in the franchise since The Empire Strikes Back. Star Wars fans are going to love it and, at the end of the day, that’s what counts. It would be churlish of me to moan that it doesn’t work as a standalone piece of work, that’s not what it is designed to be (imagine watching a single episode of, say, Game of Thrones and basing your opinion and understanding of the entire series on that single viewing), Rogue One is part of a greater whole and, as such, it “adds to” rather than “detracts from” the series.