Director Edgar Wright’s Baby Driver is the car chase movie you’ve been waiting to see since the 1970’s; it’s a high-octane, effervescently cool, toe-tapping, white knuckle wild ride set to the beats of one of the hippest, most diverse and, occasionally, goofy soundtracks ever insanely committed to film.

Oh, and it doesn’t defy the laws of physics.

Baby (Ansel Elgort) is a getaway driver, a reluctant participant in bank and security van heists paying off his debt to criminal mastermind Doc (Kevin Spacey). Baby constantly listens to music to drown out the ringing in his ears caused by a car crash that killed both his parents. When Baby meets and falls in love with waitress Debora (Lily James) and, nearing the end of his obligation to Doc, he begins to make plans to leave his life of crime and run away to a fresh beginning. But Doc has different ideas and ropes him into another job alongside the psychotic trio of Bats (Jamie Foxx), Buddy (Jon Hamm) and Darling (Eiza Gonzalez). And when things go bad they go really bad, Baby finds himself running not only from the cops but from three psychopaths hell bent on revenge. 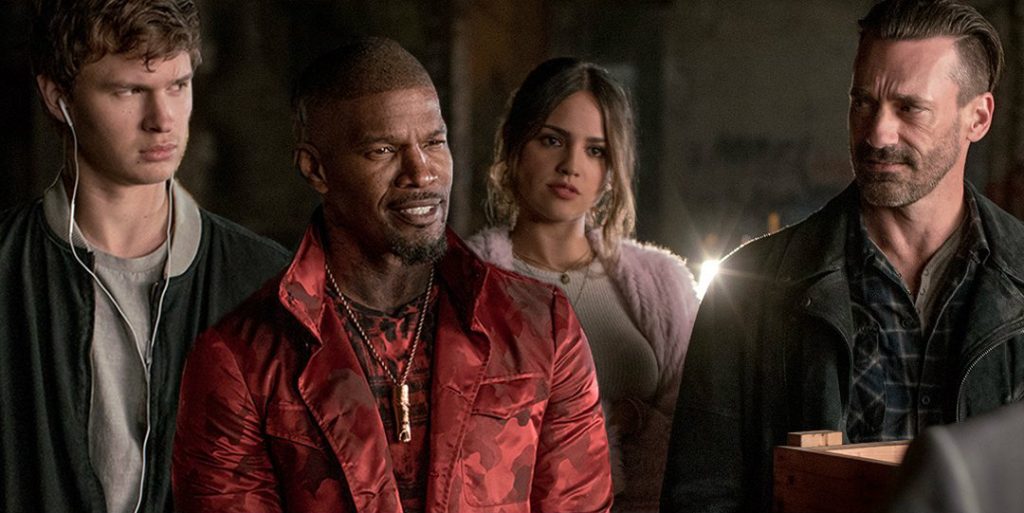 Elgort (charming as was in his breakout role in The Fault in Our Stars) really shines as Baby, all cool confidence in his ability as a driver mixed with intense desperation as his situation spirals beyond his control. It’s a star making role and Elgort grabs his opportunity with both hands.

Edgar Wright once again shows how to cast a movie with Elgort’s surrounding members all on top form. There is never any doubt that Baby’s partners-in-crime are dangerous career criminals not by their words or deeds but by their sheer screen presence. Whilst Foxx clearly relishes being let off the leash as the most overtly psychotic character it is the pure menace that exudes from every single pore of Jon Hamm’s Buddy that will send shivers down your spine when you think of this movie. It is important that we understand the psychopathy of the bad guys, never more than a heartbeat away from pulling the trigger, in contrast with Baby’s innocence, he knows what he’s doing is wrong but doesn’t want to see anyone hurt or even offended by his actions and in this Edgar Wright has delivered a masterclass in casting. Even his selections for minor characters is beyond redoubtable, from Jon Bernthal, Lanny Joon and Flea (from the Red Hot Chili Peppers) as supporting criminals to CJ Jones who plays his deaf, elderly foster-father. And, on a personal note, I can’t begin to tell you my delight at the appearance of Paul Williams as a particularly memorable gun runner.

My only minor problem with Baby Driver is with Lily James’ character Debora, she seems, at best, to be representing a goal rather than a fully-formed person. Don’t get me wrong, James does her best but the role is slightly underwritten, the problem is that when the rest of the film is so near-perfect details like this tend to glare. Although we want to see Baby and Debora ride off into the sunset and pray for their success, the film just slightly misses the emotional arcs of, say, Hot Fuzz or even Shaun of the Dead. Like I say, it’s only a minor niggle but it’d be remiss of me not to mention it.

[Excuse the pun, but…] What really drives Baby Driver is the music. The music is not chucked in there because it fits the action, it’s there to serve a symbiotic relationship with the story to create a more dynamic “whole”. It’s an exploration of what music means to us, how it moves us, provides a comfort blanket, brings us together, pushes us apart, provides a soundtrack to our lives. It is doing what all great musicals do, baring the soul and tapping our emotional cores, giving voice to our innermost thoughts and feelings and providing a beat to which we live. There’s a couple of times it’s a little too “on the nose” (such as Nowhere to Run by Martha and the Vandellas or Golden Earring’s Radar Love) but any movie that opens with The John Spencer Blues Explosion’s Bellbottoms, features Bongolia by The Incredible Bongo Band and makes something as goofy as the yodelling bits of Focus’ Hocus Pocus toe-tappingly cool can’t be all bad, right?

Kudos go to Wright who, in an age of an all-out CGI arms race, has chosen to keep all the action practical and the stunts hair-raisingly real. It’s loud and it’s brash and undeniably cool. You’ll maybe spot nods toward classic chase movies like Sam Peckinpah’s The Getaway, Walter Hill’s The Driver, Bullitt, Freebie and the Bean and Gone in 60 Seconds, amongst others, but Baby Driver isn’t a re-tread of what’s gone before, it’s a remix and, like all great remixes, it shows us that something new and surprisingly original can be created from those things we thought we knew inside out.

Like a great song heard for the first time Baby Driver makes you want to hear it again straight away, to hit replay, rewind the tape, pick up the needle and place it back at the start of the track. It’s an instant classic and you’ll kick yourself if you don’t catch it.