Not because I loved it, at least not yet. I want to see it again to cement in my mind whether it’s a truly great movie or merely a mediocre picture draped in a hallucinatory coat of many colours; whether, or not, there is actually anything resembling life in its sterility or just an affectation of life; whether there is substance in its style or whether it’s an empty, albeit beautifully crafted, vessel. Or, maybe, the truth lies in all these things.

Set thirty years after the events of Ridley Scott’s original, Blade Runner 2049’s central character is K (Ryan Gosling), a limited-life replicant working as a detective (or Blade Runner) for the LAPD, tracking down the first-generation models who can live as long as, and live as, humans. During a routine mission to apprehend/eliminate one of those rogue replicants K stumbles upon a secret that, if given the oxygen of publicity, could destroy the delicate sense of order that exists between humans and the now million strong sub-caste of androids. Ordered by his police chief Lt. Joshi (Robin Wright) to forget what he has learned, K disobeys and begins an investigation that takes him to the ruins of Las Vegas and directly to Rick Deckard (Harrison Ford) who is hiding therein. Meanwhile creepy oligarch Niander Wallace (Jared Leto), who now owns the replicant manufacturing corporation, Tyrell, has his own bizarre and ruthless interest in K.

Gosling is back in zero-emotion, Drive/Only God Forgives mode, doing a fine job of channelling Le Samourai era Alain Delon, both enigmatic and unreadable. Harrison Ford is great as the haggard misanthrope Deckard (not really a stretch, I guess, but still…). I’m still not convinced by Jared Leto, he will forever be the poor man’s Daniel Day-Lewis to me, he’s not terrible but he does seem to suck the oxygen out of his every scene. A terrific, and overwhelmingly female, supporting cast is led by Robin Wright as the stern and severe Lt. Joshi, but there’s more than a few performances that one would struggle to describe as other than breakthrough: Sylvia Hoeks as the ruthless Luv, Ana de Armas as K’s designed for pleasure hologram Joi and watch out for an all too brief, but impactful, appearance by In Syria’s Hiam Abbas.

If you’ve seen this year’s earlier entrants in the unofficial competition to melt the audience’s eyeballs, Ghost in the Shell and Valerian and the City of a Thousand Planets you’ll have some idea of the colourful visual flair on display, but Blade Runner 2049 possesses some things neither of those earlier two seemed to understand: Composition. Through the eye of cinematographer Roger Deakins’ camera lens (director of photography on such classics as Fargo, The Assassination of Jesse James, The Shawshank Redemption, Skyfall amongst many, many others) the images have depth, context, a sense of the surreal, a sense of the monolithic and, above all, an understanding of stillness and beauty. Seriously, virtually every frame is breath-taking, see it on a big screen and take in every inch of neon-lit artistry as you would the work of a great master in a gallery. 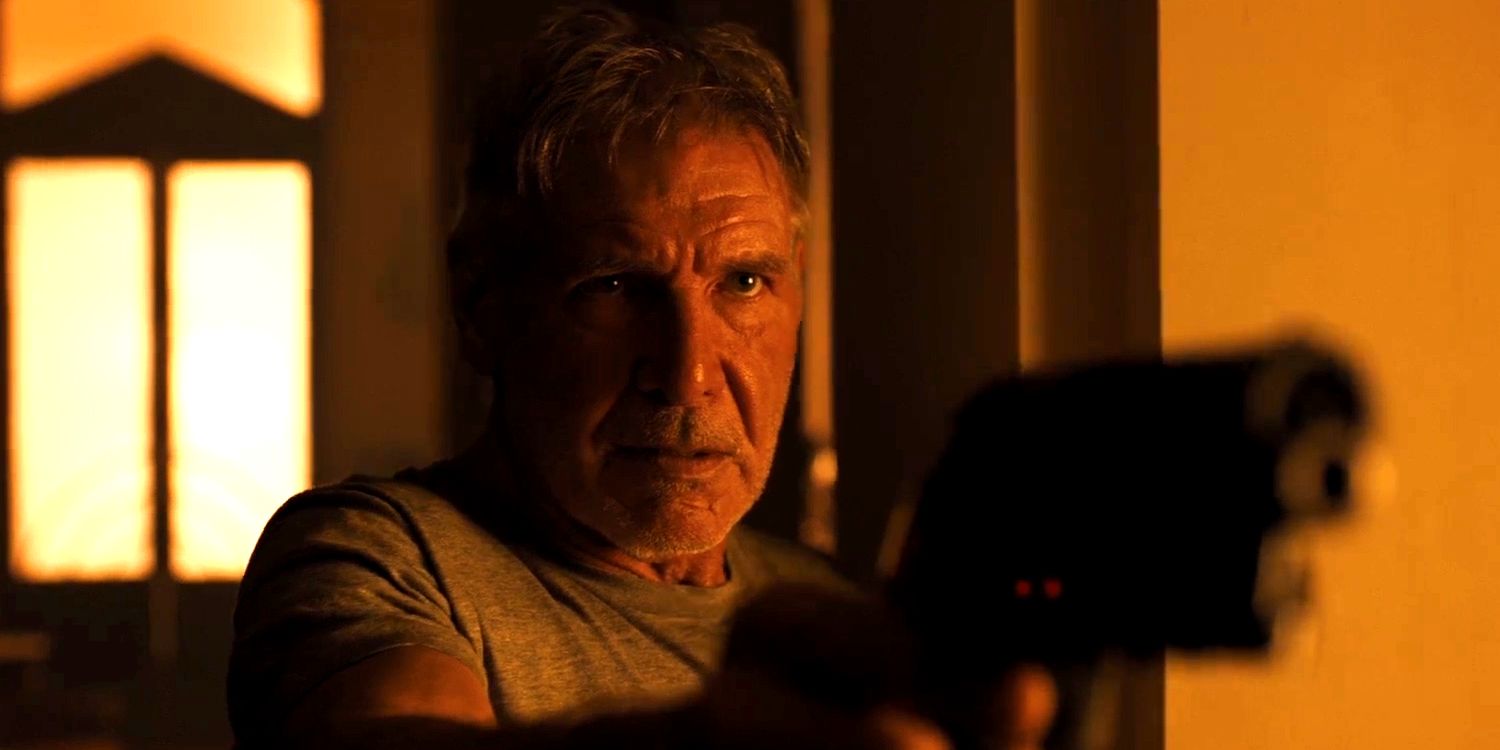 Director Denis Villeneuve returns to two of his favourite themes, two recurrent ideas that power all his films: How does man fight monsters without becoming a monster and the inherent hopefulness of female nature. He’s a director whose opus tends toward the exhaustingly tense (Incendies, Prisoners, Sicario, Arrival), so why, many might ask, is Blade Runner 2049 so slow and (I hesitate to say it, but) boring? I think it’s an interesting choice to slow everything down to a crawl, to allow time for the audience to really think about the film as it unfolds, in many ways it’s an imitation of the work of Andrei Tarkovsky (Solaris, Stalker, Andrei Rublev). It’s deliberate, thoughtful and packed but it’s very, very long. People with short attention spans or who hate having to put any thought into a movie might want to avoid and sit at home with their Explody-Robots IV dvd. If you enjoy sci-fi as allegory, fill your boots, there’s plenty to tuck into here.

Despite its undisputed influence on not only movies but upon design and culture, I’ve never really been much of a fan of the original Blade Runner. It’s just too full of holes, lacks a believable through-line, it’s an exercise in design over content and chucks in things because they look or sound cool rather than having any importance. There are multiple versions out there and it took Scott five attempts at recutting it before he actually understood what he was trying to say. Blade Runner 2049 builds upon the aesthetics of Scott’s original, cherry picking the best ideas and expanding upon them to reach a natural conclusion. It’s much closer to Phillip K. Dick’s dystopian vision, in its existential ponderings if nothing else. In fact, the less familiar you are with the original the better, I think it works best if you are not wedded to the mythology of Blade Runner and everything that has been written about it.

Like I say, I’m genuinely torn by Blade Runner 2049 and maybe I should have written this after that second viewing. I think it might be one of the greatest sci-fi movies ever made, but I’m not sure.