A few months ago we took a look at Colchestersoup, a simple idea with its origins in Detroit, USA. The Colchestersoup events have come a long way since those early days and Karen Taylor now brings us up to date.

It’s well over a year now since Colchestersoup first opened the doors in Colchester at the Hythe community centre and it’s been an absolute rollercoaster of a year!

Back in January 2015 the soup concept was a new one to the UK with Colchester being the 3rd town to host soup evenings.

We constantly had to explain the concept… no it’s not a soup kitchen… and we still do. But that’s OK. Since then we’ve met up with the originator of Detroitsoup (who we nicked the idea from) after she was flown over by Richard Branson and have learned that after 6 years of Detroitsoup she still has to explain it to her own father. 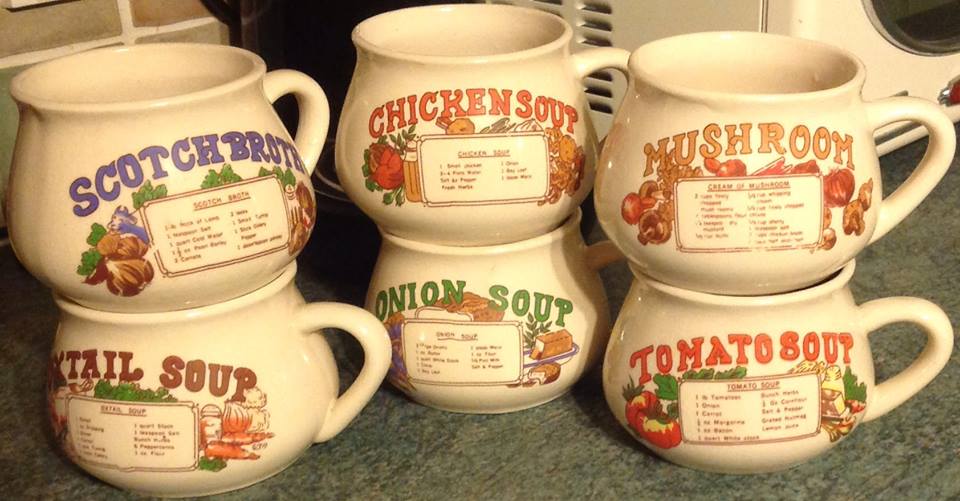 But it’s a whole lot easier now. BBC world news visited us in Colchester town centre in March last year, wrote a stunning write up and soup exploded all over the country. Figuratively.

We’ve been in newspapers, on the radio, in magazines and blogs and visited other soups as far north as Newcastle- They had been trying to get funding for 2 years but nobody ‘got’ the concept. Until the BBC article.

Now there are more than 50 in the UK. We’ve had visitors to Colchester who have flown down from Scotland to see how it works, visitors from the Czech Republic and on no soup night is there a room full of entirely Colchester people – the last one included Lithuanians, Czech and Chelmsford people amongst others. 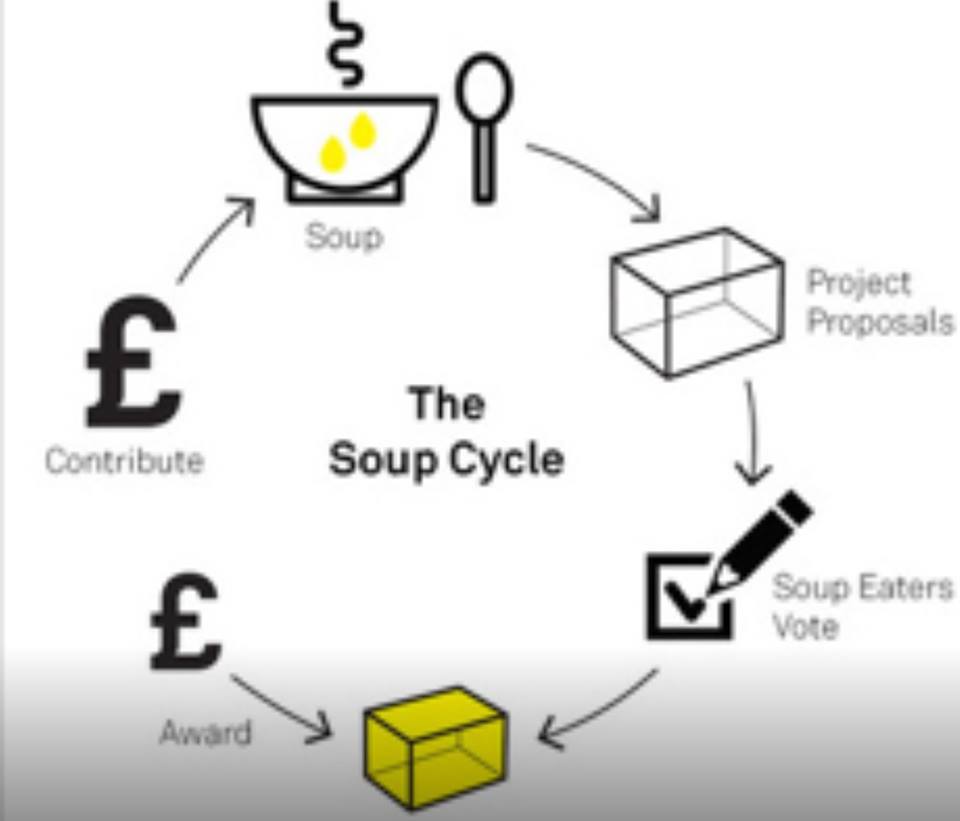 The idea is simple – we rent a room, provide some soup and invite 3 people to speak about their idea and what they would do with any money won. The 3 people will have already submitted forms telling us about their idea – that way we can select a varied group for the entertainment of the room. Visitors pay a donation at the door for soup and a vote, the money goes in a pot, 3 people speak, everybody has homemade soup and a roll while discussing who they are going to give their vote to. Votes are counted – highest votes takes all the money. On two occasions people have shared with joint top votes. The community in the room decide who gets the cash – not us, not a grant form, not a committee. People for people. 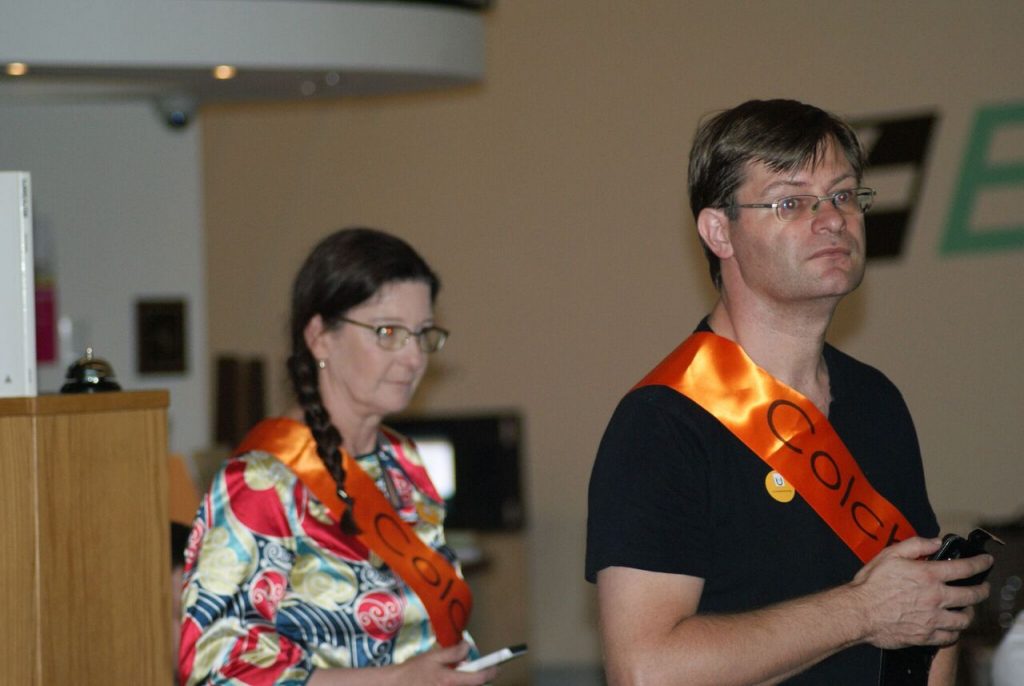 We like our numbers here at soup. After all there would be no point if we couldn’t measure the impact so a few statistics…

We’ve run 15 soup events over a period of 17 months.
We’ve run 3 events for councillors where the councillors put their community grants in a pot, one for Essex County Council alongside Harwichsoup to show ECC how it could work, one for Colchester Voluntary Services, and the other 10 were ‘normal’ soups.
At those events 60 people have stood up and talked about their ideas (there are more at councillor events- everybody that asks gets a turn)
Of the 60, 4 were charities, 23 were other organisations, 24 were individuals with good ideas and 1 was a local business.
The councillor pots accounted for £10,000 distributed across 23 different organisations.
The remaining soups have ‘redistributed’ £3,130.68 from visitor pockets to pitcher pockets.

The pitchers have included such ideas as: 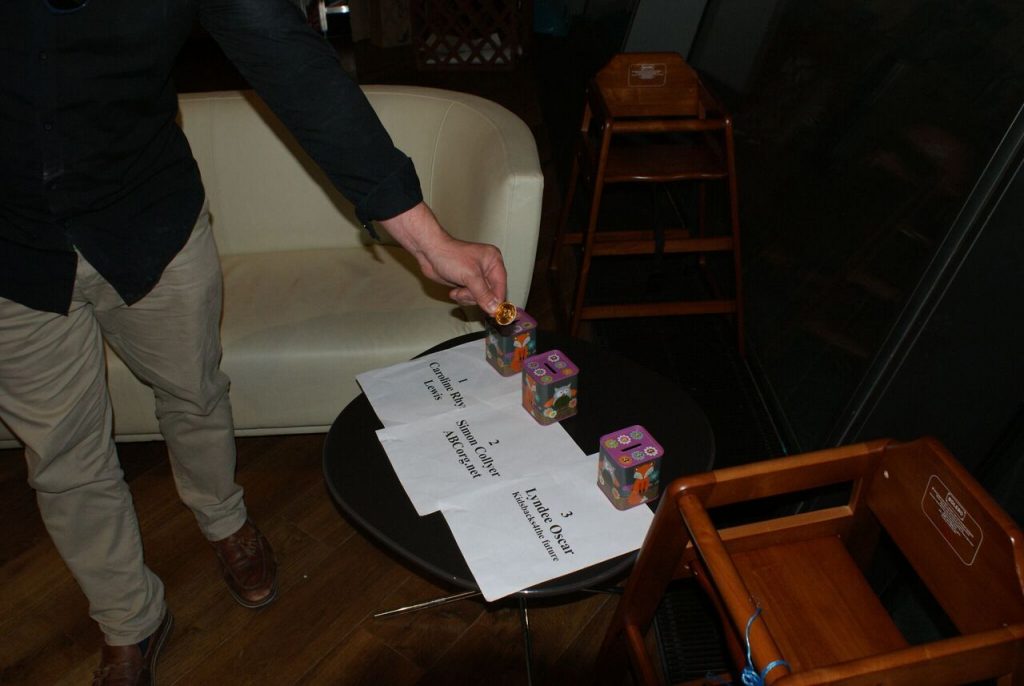 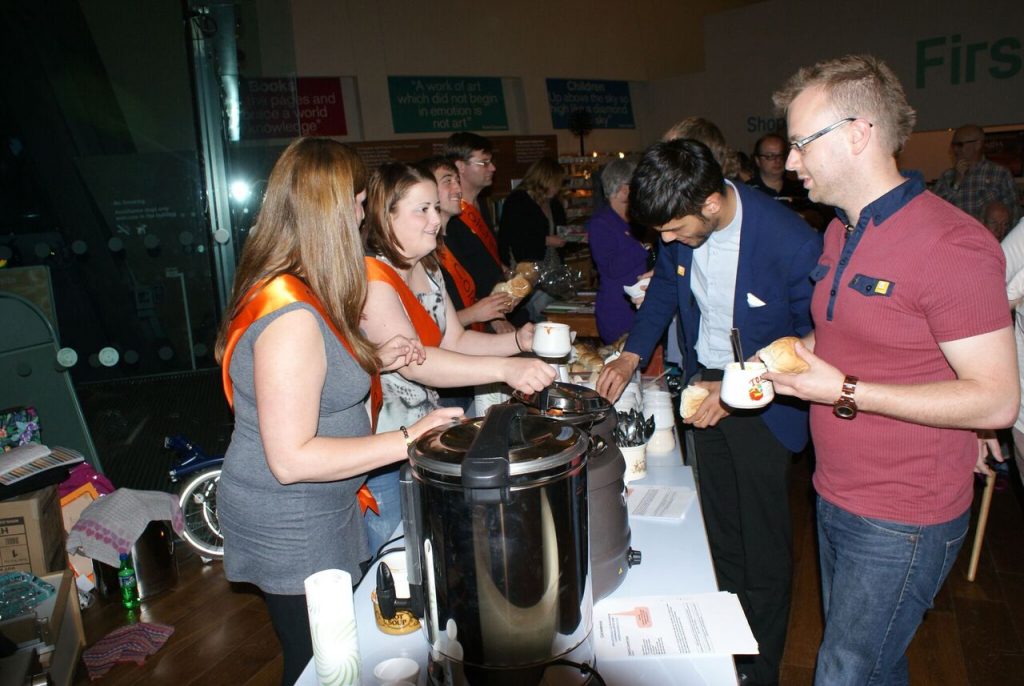 Some of those won, some didn’t but let’s use those as examples…

Fitting out a van – his 50th birthday – he raised awareness and gained extra donations outside of soup
Star ratings – someone else in the room offered to create the website which the money was needed for – doubling it’s value – he won
Pottery lessons – they won – someone else in the room gave them access to heavily discounted clay
Potters wheel – they won – it’s probably spinning as you read
Exoskeleton – this was the final amount of money needed for revolutionary health care usually only available to the forces – he won and is the first civilian in the UK with this intervention. He was due to have his leg amputated the following week.
Funding for a book – one is published and has great reviews – the other – watch this space
Korfball – didn’t win – someone else in the room offered an entire team of players
Minecraft overlaid with Camulodonum – hopefully will be in all schools in Essex soon – he won but gave his money away to joint winners Foodbank
Grief counselling – she won – needed money for office space but someone else in the room gave her the office space – free – money used for sourcebooks instead – doubling the value
Disability adjustments – strong East of England charity – there to raise confidence of the presenters speaker skills – he’s come back from devastating injury – now a confident presenter 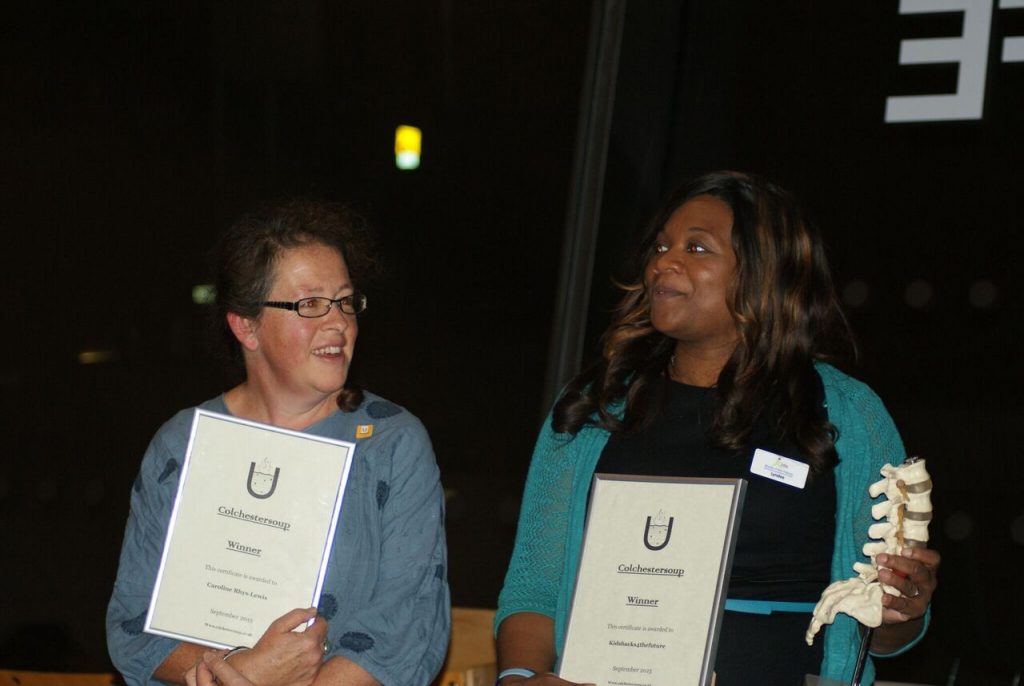 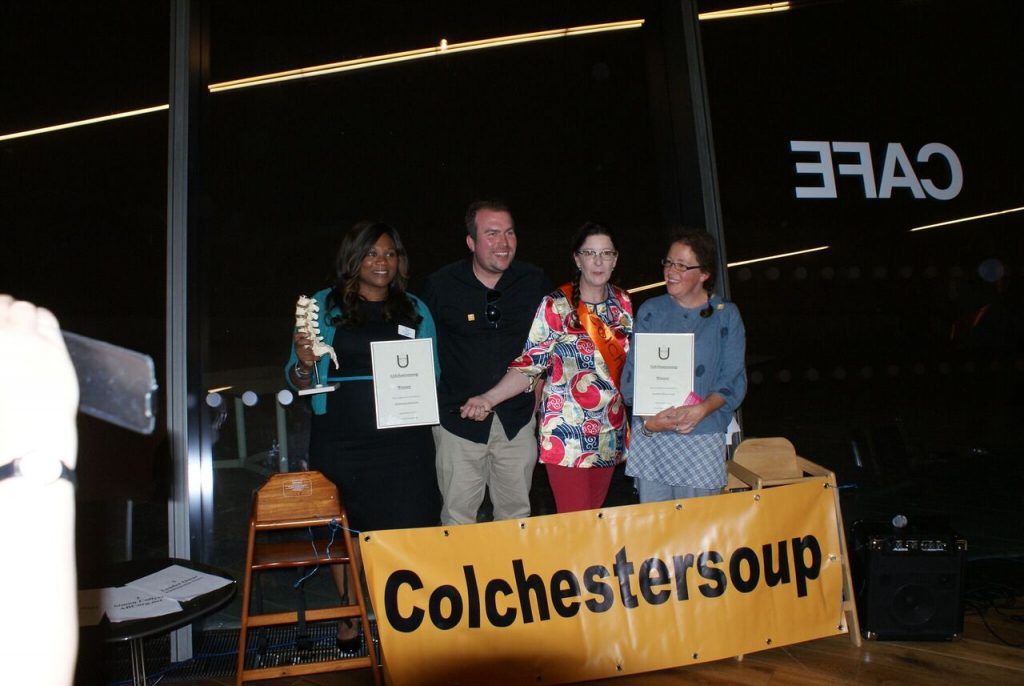 With numbers that good we should be really pleased to continue. To be honest it’s the stories at the bottom of the page that are our reason for being. Every time we go home we are buzzing with the new ideas that WILL happen in Colchester just because a group got together in a room for a few hours.

All we did was rent the hall and bring some soup along.
Find out more about soup HERE
Or follow us on twitter @colchestersoup
And like us on Facebook www.facebook.com/Colchestersoup
Listen to soup in action courtesy of brilliant community person Adam Roxby Here.