When Colchester 101 asked for a review of The Legend of Tarzan our resident movie critic Andy Oliver swung into action. 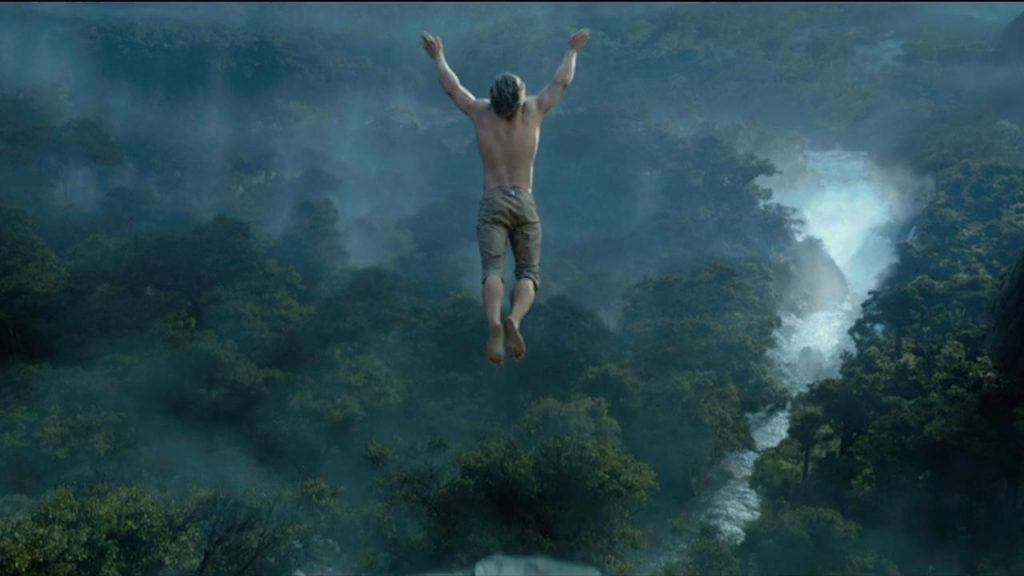 Tarzan is a character out-of-time. In a post-colonial world, the “Slayer of beasts and many black men” is an anachronism, a throw-back, a hero for then and not for now. As much as I loved the Tarzan novels of Edgar Rice Burroughs as a child, it was always difficult not to notice the underlying racism and misogyny that pinned them firmly to the era they were written in: the natives were invariably cannibalistic, mean and destroyers of the nature that surrounded them; women were either damsels or riches/power-hungry manipulators of men.

So how does a film-maker approach Tarzan in the twenty-first century? Very carefully, it would seem. And it is that very carefulness that is at the centre why The Legend of Tarzan does not work as a piece of entertainment, though, unfortunately, it’s not its only failing.

Set some years after Tarzan (Alexander Skarsgård) has returned from his jungle upbringing to claim his hereditary title of Lord Greystoke, the film begins with a character still uncomfortable with his gentrification and his wife, Jane (Margot Robbie) still uncomfortable with the constraints of society and city life after her childhood of freedom in the Congo. It is with little persuasion that the Greystokes return to Africa, initially to investigate British access to The Congo and subsequently to investigate claims that King Leopold of Belgium is building his empire on blood and toil of slaves. This second reason to return arrives in the form of George Washington Williams (Samuel L. Jackson) before you can say, “British Colonial crimes against humanity”! 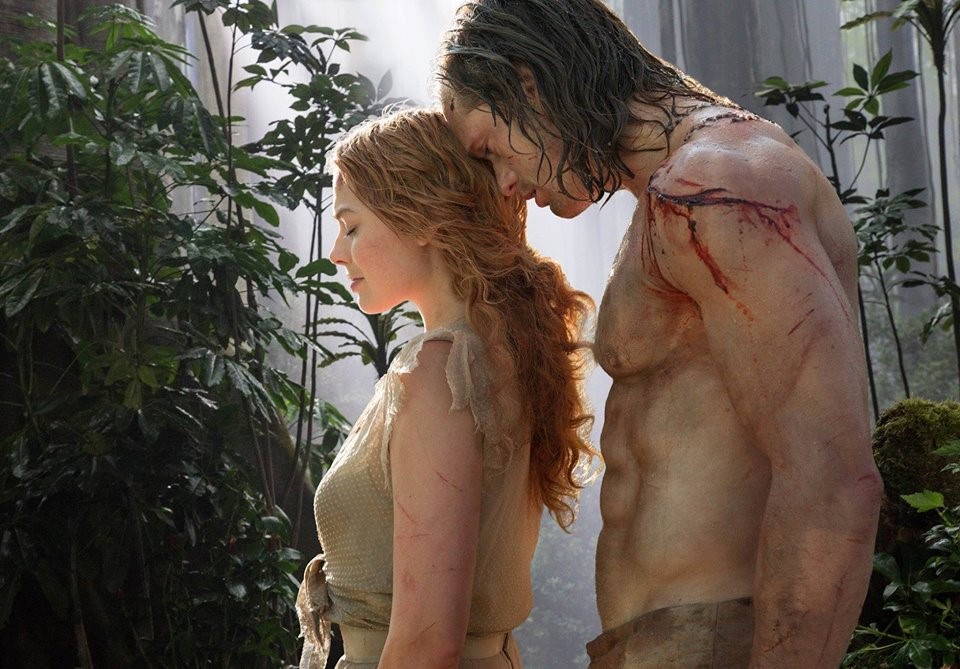 Once back in Africa, Skarsgård (and the film) can’t wait to get his shirt off and start swinging, swimming and running about with his old jungle chums: apes, lions and simple, jolly natives. Conflict comes in the shape of Belgian emissary, Leon Rom (Christolph Waltz doing his usual, kooky bad-guy turn) who has some convoluted plan to hand over the lord of apes to his mortal enemy, Mbonga (played with super-baddie charisma by Djimon Hounsou). The story of Mbonga’s enmity is told in flashback which also charts Tarzan’s already well recorded origin.

Director David Yates, who directed the fun (but increasingly dark) last few episodes of the Harry Potter franchise, struggles to maintain any pace and interest in a movie that looks increasingly like it was written by committee (inasmuch as that old joke about “a camel is a horse designed by a committee”). There are moments where, tonally, the movie is all over the place and Jackson (despite giving his best with a more than clunky script) sometimes seems little more than the movie’s “Get out of jail free” card (an intelligent black character, based upon a real person, whose expositionary speeches about fighting in the American Civil War and killing Native Americans are supposed to remind viewers of America’s own patchy record of human rights, but in reality feel flat and simperingly apologetic). 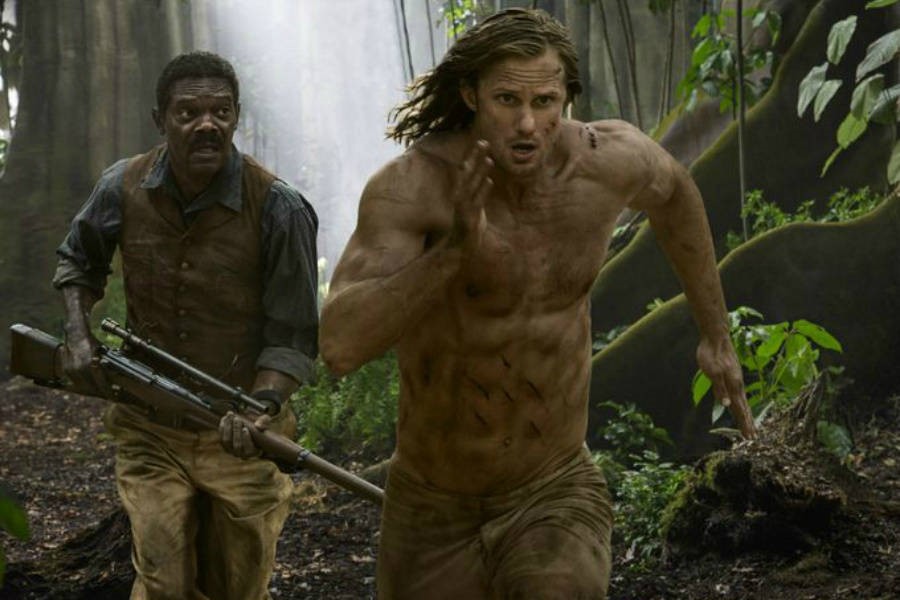 The action, when it comes, is efficiently filmed and never feels like it packs any punch, for example Tarzan battles a gorilla, but the confrontation lacks excitement and edge-of-the-seat thrills, yes it’s noisy but it’s all a bit, “Yeah. So that just happened”. The stunt work is under-realised and the computer generated animals never look anything but computer generated. Judging The Legend of Tarzan’s effects against this year’s other child-in-the-jungle movie, Disney’s The Jungle Book, is like judging a meal at The Ivy against a micro-wave dinner for one: it fills a hole but it won’t impress your friends when you tell them about it. Having said that, the climactic stampede is pretty good, but it’s a case of too little, too late. 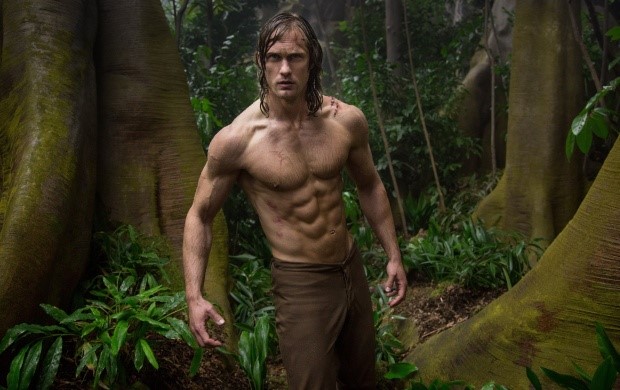 The cast do their best but they are shackled by a script that is never quite sure what it wants to be: too comic-booky to be Hugh Hudson’s Greystoke, too earnest to be a Jonny Weismuller action/fun-fest. Belgium’s legacy of horrors in West-Africa sit uneasily within an action movie framework and add little to the overall tone, a return to the source material might’ve provided a more fun, if problematic, experience. Like The Lone Ranger before him, Tarzan feels like a character who has had his day and now seems like as good a time to retire him and hand the vines to new heroes as any.

There’s little to recommend about The Legend of Tarzan unless you’re a fan of male abdomens, if you are you’ll probably love it, for the rest of us though it’s an ill-fitting wig that daren’t move too fast lest it fly up and reveal what lies beneath.