There were 26 years between two of Hollywood’s most iconic chillers, Jaws (1975) and The Silence of the Lambs (1991). Any hopes that lightning might strike for a third time are fading fast as, 26 years after Hannibal Lecter’s fava bean and chianti sides, the “great white hope”, an adaptation of bestselling Norwegian author Jo Nesbø’s The Snowman, fails to deliver a single shiver.

Based on the seventh of Nesbø’s successful Harry Hole (pronounced Hool-eh, so no jokes about Michael Fassbender’s Hole, okay?) detective novels, The Snowman struggles to find anything new to bring audiences unfamiliar to the author’s work whilst also alienating his existing fanbase. When elite crime-squad detective Harry Hole (Michael Fassbender) investigates the disappearance of a young woman he begins to suspect that the elusive serial killer dubbed “The Snowman” may be on the prowl again after years of hibernation. With the help of brilliant rookie Katrine Bratt (Rebecca Ferguson), Hole has to connect his investigation to decades-old cold cases if he wants to catch the killer before he (or she) strikes again. 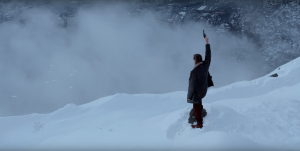 Various characters appear, disappear, deliver exposition and generally muddy the waters of both the investigation and the movie’s plot: J.K. Simmons plays a sinister magazine mogul trying to engineer a major winter-sports event; Charlotte Gainsbourg as Hole’s ex, Rakel, who constantly interrupts proceedings with some crisis or another involving their teenage son Oleg (Michael Yates); James D’Arcy as the hostile husband of the disappeared woman; Chloe Sevigny as identical twin chicken-farmers (one of whom is basically just a head stuck on top of a snowman); and a precariously coiffured Val Kilmer who appears in flashback scenes as the detective in charge of the original Snowman case. The audience is led up and down numerous snow-blind alleys and served up more than a barrel’s worth of pickled red herrings on their way to a finale that’s as bafflingly impractical as it is emotionally unrewarding.

Fassbender is fine as the clinical detective who is only ever really alive when he’s challenged by his work and a hopeless alcoholic when he’s not. Rebecca Ferguson is the standout as the feisty and eager Katrine, though she’s never quite handed enough by the script to really get her teeth into. The rest of the cast do the best they can with what little they’re given, although I’d like to know the reasoning behind the bizarrely bad voice-dubbing of Val Kilmer’s appearances.

The real detective work that hangs around The Snowman though, is how such a fine pedigree of talents (both in front of and behind the camera) managed to produce such a mutt? Director Thomas Alfredson, the man behind the near-impeccable Let the Right One In and the equally classy Tinker, Tailor, Soldier, Spy, seems to have not just dropped the ball but left it on the bus on his way home from the shops, a bus that subsequently burst into flames, driven off a bridge and plunged into a lake full of ball-eating piranhas. Where Jaws and Silence of the Lambs relied on a slowly building intensity and an inexorable feeling of inevitable dread, The Snowman goes straight for lurid, grisly shocks straight out of the most basic eighties slasher canon. Martin Scorsese is on board as executive producer and top-notch editors Claire Simpson (Platoon, Wall Street, The Reader) and long-time Scorsese collaborator Thelma Schoonmaker fail to pull the pieces together. Perhaps the fault lies at the feet of the writers? Peter Straughan (Frank, The Men Who Stare at Goats, Wolf Hall and the afore-mentioned Tinker, Tailor) and Hossein Amini (highs: Drive, The Wings of the Dove, lows: 47 Ronin, Snow White and the Huntsman) appear to have forgotten that what appears terrifying on the page may appear ridiculous on the screen, not the least of these being the snowmen which appear at every murder scene just come across as naughty or sad Olafs rather than signposts of evil.

Not the worst movie of the year by a long stretch but The Snowman is pretty abominable.

A bunch of chums (Rafe Spall, Arsher Ali, Sam Troughton and Robert James-Collier) go hiking in Sweden in memory of their friend Robert who was murdered in a convenience store robbery. Luke (Spall) is especially traumatised because he failed to intervene in the senseless killing and hid behind shelving unit during the crime. When one of the chums twists his ankle, a shortcut through a forest is decided upon with predictable horror movie results.

Can you see where this is heading?

There’s good, solid performances by all but The Ritual is more of a trudge than a brisk hike. There’s nothing here you haven’t seen before, in fact there’s probably less. Sometimes you need a creepy local to say, “Stay out of the woods, lads” just to add a bit of context, which is something this movie sorely needs. It’s all a bit dull and you’ve seen it all before (unless this is your first horror movie, in which case you might experience minor goose-pimpling). It’s a calorie free rice cake of a movie, which is fine I suppose, I just like my calorie free rice cakes to be dipped in chocolate and smarties and served between two cream buns.