Batman Vs Superman: Dawn of Justice (BBFC 12A)

If you are planning a trip to Colchester’s Odeon cinema to see Zach Snyder’s much anticipated clash of the superheroes then you’ll want to read Colchester 101’s very own resident reviewer Andy Oliver’s thoughts first. 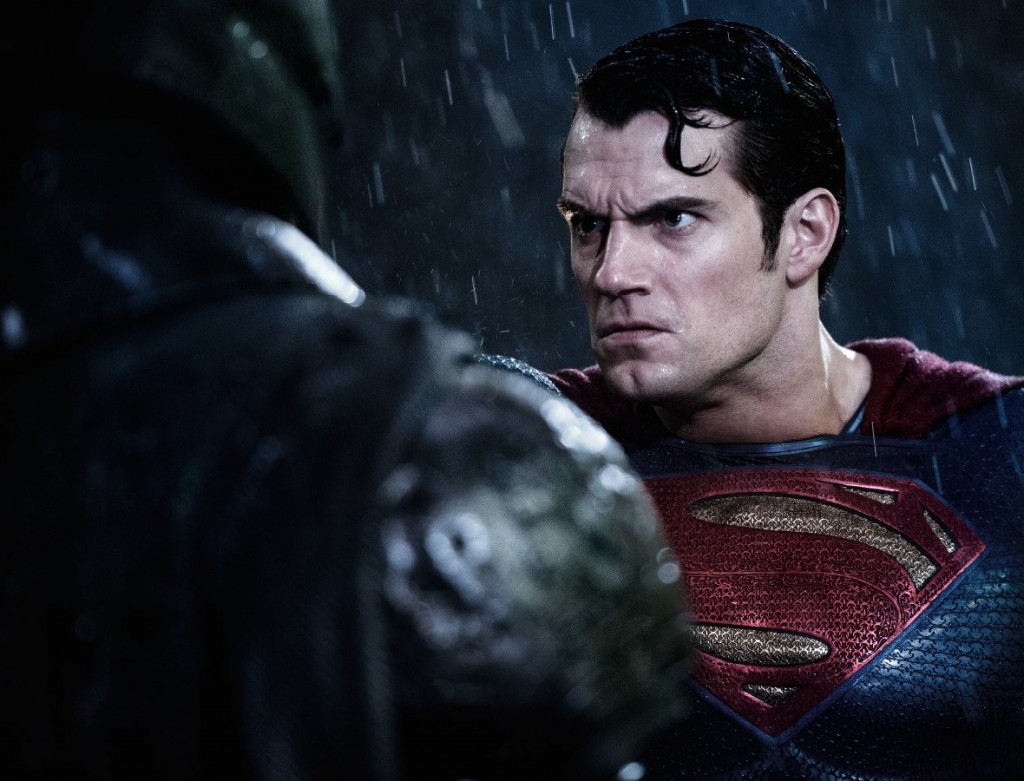 Batman Vs. Superman: Dawn of Justice (hereafter referred to as BvS, for the sake of brevity AND because I really hate that Dawn of Justice coda) is a broken movie. It just doesn’t work. It’s a member of that movie club that makes bazillions of dollars because of their subject matter and not because they’re any good (see Jurassic World, pretty much all of the Pirates of the Caribbean sequels and ALL of the Transformers movies).

BvS sits awkwardly as a sequel because it treats Man of Steel as almost a prologue to the main story arc that this is trying to set up (non-comic book fans may not understand that the “Justice” bit of the title refers to a superhero team: Justice League of America*). So, although you don’t necessarily have had to have seen Man of Steel, BvS assumes you did.

BvS kicks off with a flashback to Man of Steel’s climactic battle that all but destroyed the centre of Metropolis, but this time we are watching it from ground level, from the perspective of the citizenry demoted to merely collateral damage. More specifically we follow Bruce Wayne (Ben Affleck) as he races to evacuate his employees from the Wayne Enterprises Building that stands amidst the super-powered carnage. It is this event that convinces Wayne that Superman (Henry Cavill) is a threat to humanity, not its saviour and that a world without Superman would be a safer place for hard working, ordinary people and so begins to plan (as his alter ego, Batman) to take the last son of Krypton out of the picture. 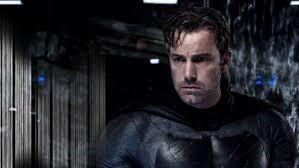 Skip to eighteen months later and whilst Batman is looking for a way to take Superman down, Clark Kent (Superman’s alter ego) in his capacity as a reporter for The Daily Planet is trying to launch a campaign against The Dark Knight whom he sees as an overly violent vigilante with no regard for the law.

Meanwhile, Lex Luthor (Jesse Eisenberg) is also planning to destroy Superman, first by means of a lump of Kryptonite and then by reincarnating General Zod; there are senate hearings about bringing Superman under Government control that all come to hinge on a wheelchair and a jar or pee (I kid you not); a mysterious woman seems to be keeping tabs on Batman; Lois Lane (Amy Adams) keeps getting herself into situations only Superman can save her from and there’s a whole bunch of dream sequences that may or may not be some sort of reality in about fifteen movies’ time.

This all sets the scene for the showdown that the “Vs.” in the title alludes to, but you’ll have to wait about two gruelling hours of the film’s two and a half hour running time for it all to kick off. The last half hour is almost non-stop fighting as first the two heroes duke it out, then they have to come together to battle the reincarnated Zod (now mutated into an unstoppable killing machine called Doomsday and looking like a cross between a Lord of the Rings Cave-Troll and a Ferraro Rocher chocolate). The mysterious woman from earlier is revealed to be Wonder Woman (Gal Gadot), who valiantly joins the fracas and – ta-dah – we have the core trinity of the Justice League of America. 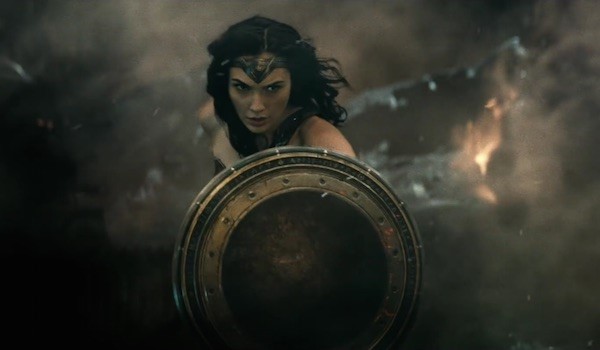 It’s a pretty flimsy plot and, to be honest, it’s not very well told. There’s a heck of a lot of padding and time wasted on sub-plots that lead absolutely nowhere. The first hour, especially, feels thrown together willy-nilly with no effort made toward giving the film any pacing or narrative coherence, where the plot and dialogue should lead to the next scene the actual next scene is often a complete non-sequitur. Although this is an absolute bonus if you have a weak bladder, story-telling wise it’s a complete mess.

Director Zach Snyder seems more interested in recreating religious iconography and comic book panels than in actually telling a story, he’s a lot like (Transformers director) Michael Bay: he knows how to put an astonishing visual onto the screen, he just doesn’t know how to connect them into anything resembling an interesting and coherent story. He throws a lot of stuff into BvS that comic book geeks will love spotting but will leave a casual viewer scratching their head (yes, that is Robin’s costume, daubed with a taunt from The Joker, hanging in a cabinet in the bat-cave; yes, that’s the bit from Frank Miller’s The Dark Knight Returns where the sunlight revives a skeletal Superman; yes, that graffiti did read “Who watches the watchmen?”, etc.). Even the cameos (in the form of short YouTube-like videos) from future JLA members The Flash, Aquaman and Cyborg are whiffed, they’re hinted at twice before we finally get to see them and when we finally do the sequence is thrown hap-hazardly into the middle of one of the action sequences, once again destroying the film’s pacing.

Snyder quite obviously either doesn’t understand Superman or actively hates him. Superman’s whole thing is that he wants to be a hero, he wants to help the people of his adopted planet, Snyder’s Superman is a reluctant, brooding and occasionally Quixotic emo whose only touchstones to humanity are Lois Lane and his adoptive mother, Martha Kent. Cavill is given little to do acting-wise and that’s a shame as he seems such a personable guy off-screen. 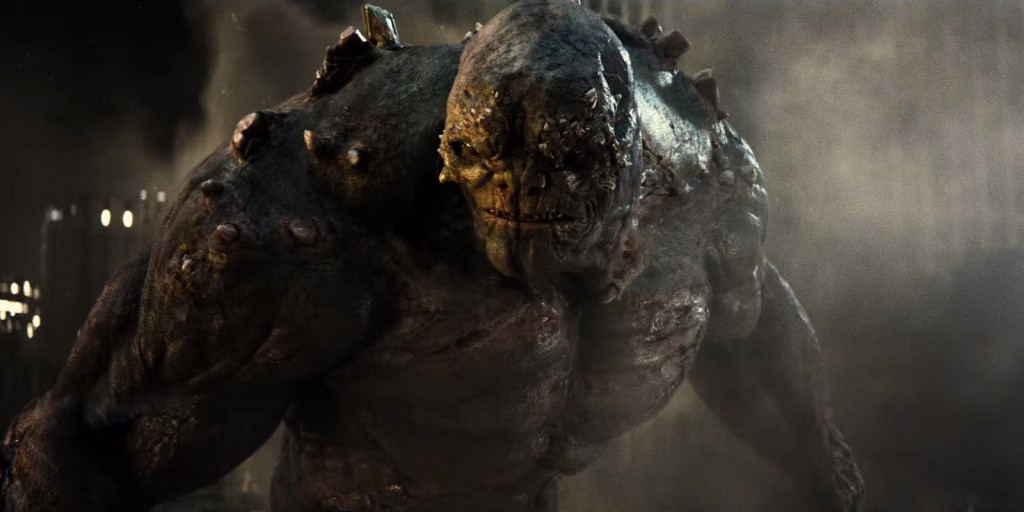 Ben Affleck makes for a much more human Bruce Wayne than any of the character’s previous incarnations, there’s a bit of the James Bond, playboy about him that works really well. As Batman he’s fine, he’s not “punch the air” great, but he’s, y’know, fine. And, at least, they’ve finally got a Bat-suit that seems flexible enough to actually move around in.

We don’t get to see enough of Wonder Woman to make a judgement call, really. What we do see looks pretty good, though, she’s every bit as powerful as Superman and there’s a glint in her eye when she’s fighting or flirting that makes me want to see more of her, she genuinely looks to be having fun when she’s doing either.

By far the worst thing in BvS though is Jesse Eisenberg’s Lex Luthor. I have no idea what movie Eisenberg thinks he’s in or who he thinks he’s playing, but I could quite happily live the rest of my life in happiness if I never see him again. Tonally, he’s all over the place, if Heath Ledger based the character of the Joker on Tom Waits then Eisenberg is basing his Luthor on Tommy Lee Jones’ Two-Face. He’s annoying and annoyingly played.

BvS is a frustrating experience, there are no character arcs that make any sense; characters take actions that make no sense; the whole third act hangs on a plot device that makes no sense; Snyder has no sense of pacing, story-telling or tension building; it’s incredibly dour with absolutely no sense of fun (the one joke appeared in the trailer and wasn’t that funny the first time I saw it) and, although it is not terrible it’s also not very good at all.

*The Justice League of America first appeared in 1960, today it sounds like something Donald Trump might rename the Republican party, sadly.